Do all electric guitars have whammy bars? When you see that strange stick coming out of an electric guitar, you wonder what it’s for. It’s a whammy bar, to be sure! The whammy bar is a fun playing instrument that bends the string and changes its pitch.

It can be used for numerous things. You could question if it’s terrible for a guitar. Is it possible that it will harm your guitar bridge or strings in any way?

For a guitar, the Whammy bar is completely safe. They wouldn’t create these if they didn’t have to. However, when you use it, you’ll find that your strings start to fall out of tune. But if that’s the case, it’s unlikely that your strings are out of tune due to a whammy bar. It’s most likely something else on your guitar that isn’t working properly.

What Do Whammy Bars Do?

A Whammy bar, or tremolo bar as it’s also known, changes the tension on the strings all at once.

Because each string’s tension varies, and the effect of changing tension varies based on the note’s frequency, the fluctuation in the pitches of each string is significant, and the guitar does not stay in tune when the bar is moved.

The disadvantage of having a whammy bar on your guitar is that if you break a string, the entire guitar will go out of tune since tuning is based on a balance between string tension and the whammy bar springs on the underside of the guitar.

The spring tension pulls on the remaining strings when one string snaps, knocking them out of tune.

Why is it Called a Whammy Bar?

Since the 1950s, “whammy” has been used as an onomatopoeic slang term. It’s most commonly connected with bridges that may bend at an extreme angle.

The Fender Stratocaster design was the first to use a whammy bar, which was later followed by Floyd Rose and Kahler designs.

A Whammy bar is a lever attached to an electric guitar’s bridge or tailpiece that can be depressed to increase string tension and produce effects like vibrato, portamento, and dive-bomb.

Who Invented the Whammy Bar?

Tremolo or vibrato bridges are other names for whammy bars. When it comes to the finer points, they are very common on popular electric guitars worldwide.

They date back to the 1930s when Doc Kauffman invented and patented the first mechanical vibrato unit. This mechanism, formerly known as the “Vibrola,” gained popularity after being installed on a few Epiphone Archtop guitars in the late 1930s. Every guitar manufacturer wanted a piece of the action.

Merle Travis, a popular country guitarist at the time, was tired of his faulty, spring-loaded Vibrola, causing his guitar to go out of tune. A friend of his, Paul Bigsby, was tasked with fixing it. Paul’s “repair” went too far, and he invented the Bigsby, the first real vibrato system.

The main component of the Bigsby Vibrato is a rocker bridge. The strings wrap around a metal bar attached to the tremolo arm instead of going through holes. A guitarist can lower his arm and loosen the strings to achieve the pitch change.

The idea of the whammy bar hadn’t completely reached the general audience before the Bigsby vibrato/tremolo bridge was released.

The Bigsby is now regarded as one of the most distinctive whammy bars. It provides a smooth, user-friendly feel and is commonly seen on older archtop guitars. It’s not the best at staying in tune, and its pitch bend isn’t as severe as others. The Bigsby is one of the best whammy bars if you seek a smoother, more subtle whammy.

Leo Fender, the principal designer and inventor of Fender guitars, was the next to make a breakthrough in tremolos. The Fender synch tremolo made its debut in 1954 on the Fender Stratocaster. The goal was to make a tremolo with a wider pitch range and the ability to bend up.

When Leo Fender-designed his tremolo, he decided to start with floating bridges before moving on to the more stable synchronized tremolo. Because the saddle and strings were designed to move in tandem like one big movement, it was given the name synch or “synchronized” tremolo.

When the bar was laid to rest, this helped eliminate string friction with the saddle, allowing the strings to return to their normal tuning and tension. The tailpiece is fashioned out of a piece of metal that rests flat in the guitar’s body, with holes in the top to allow the strings to pass through.

It is significantly more stable than the Bigsby because the arm moves through the bridge and into the tailpiece. This design was utilized as a starting point for most current tremolos. It is, without a doubt, one of the most influential whammy bars.

Do All Electric Guitars Have Whammy Bars

However, heavy use of the whammy bar may alter your tuning, depending on your guitar model.

Guitars of the lower grade will go out of tune considerably faster than guitars of higher quality.

The increased abuse or tension on your strings caused by a whammy bar will still cause them to stretch and weaken faster than a fixed bridge.

In addition, the tremolo’s spring will become weaker with time.

Although a good tremolo is designed to minimize this effect as much as possible, it’s still a tradeoff to think about.

Fitting a new bar on a guitar can be difficult; thus, we strongly advise you to seek out and have this work done by a professional.

I say this because you might need to carefully cut a new hole in your guitar to make room for the mechanism.

How Do You Keep a Whammy Bar in Place?

Is it possible for a bar to fall into the body?

First and foremost, different models will have different springs, some of which are stronger than others.

If you’re having trouble with this and using heavy strings, try switching to lighter strings.

When using the whammy bar, a major issue arises when the strings become slack and, as a result, alter position in the nut.

Friction near the nut can prevent the strings from returning to their original, natural state when the whammy bar is reset to neutral, and this can be a major cause of tuning difficulties.

Replace the nut first, or if that isn’t possible, connect the whammy bar to the bottom strap button with a rubber band. Superglue is always an option for a more lasting solution. 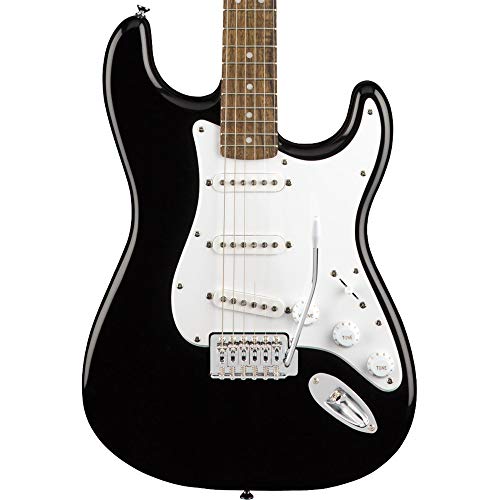 A lightweight body, a vintage-style tremolo bridge for classic pitch effects, and three single-coil pickups for classic Strat tone are all included in the Squier Stratocaster.

The Squier Frontman 10G amplifier, which comes with it, is great for jamming because it has an aux input for playing along with your favorite songs or backing tracks and a headphone jack for silent practice. You’ll also get a padded gig bag, strap, cable, and picks with the Squier Starter Strat Pack, so you can stop daydreaming and start playing right now.

The inspired tone of a Stratocaster is one of Fender’s pillars. It’s a whammy bar-equipped electric guitar. The player Stratocaster exudes a classic Fender feel and flair with bell-like high-end, robust mids, deep bottom tone, and crystal-clear articulation. It can handle any music and is ready to assist you in realizing your musical ideas. It’s also an excellent instrument to begin experimenting with your sound.

For almost a decade, Yamaha Pacifica guitars have been one of the greatest electric guitars with whammy bars, excellent tone, and playability. It was created in 1990 to capture the performance, adaptability, and distinctiveness of the California scene. It was created to accommodate a wide range of genres and play styles. Various pickup configurations provide a wide spectrum of tones, from severe distortion to a clear, clean tone.

Conclusion on Do All Electric Guitars Have Whammy Bars?

Do all electric guitars have whammy bars? A whammy bar will not harm your guitar in any way. You may notice some tuning stability concerns when you use it, although this is unlikely to be due to the whammy bar itself.

If you truly want to understand how to operate a whammy bar, you should first spend some time playing around with it. To see how the sound reacts, try playing various chords while lowering your arm.

Dropping the bar at different rates will produce different sounds, so you’ll need to practice to understand what sound you want.